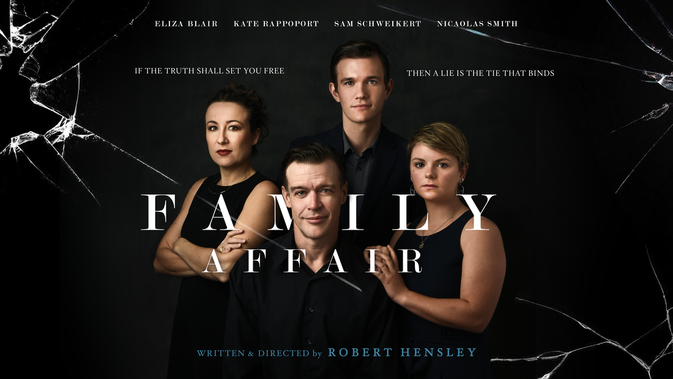 ABOUT
Four adult siblings come together to celebrate the release of their brother from prison. Emotions run high in this intimate drama. They must move beyond their judgments of each other, and come together as a family to overcome years of secrets, which could have devastating affects on all of them if the truth is revealed.
Family Affair on IMDb
DIRECTOR'S NOTE
The idea for FAMILY AFFAIR came from a conversation with Tony Award-nominee Valarie Pettiford regarding the sometimes detrimental lack of rehearsal on film projects.
I’d been playing with the idea of a film about siblings for a while, and drafted a treatment, which outlined the history of the family, and on which I based the first draft of the screenplay. It was a skeleton draft which provided a rough roadmap for the characters - for a film. This is what was presented to casting director G. Charles Wright in the hopes of casting an ensemble who would be willing to work and rehearse the material for a month, while I was writing and revising the screenplay. Their input on the characters would be written into the film.
Over the past five years, I’ve worked with the same crew to produce several award-winning short films. I couldn’t imagine another group of people with whom to work to make FAMILY AFFAIR.
On a micro-budget, with a limited number of days in which to shoot, a rag-tag crew I could count on both hands and a courageous cast faced the challenge of shooting a feature film with as minimal a footprint as possible. We embraced the concept of guerrilla filmmaking; we “stole” shots in public parks, parking lots, and in hotels. We managed multiple company moves per day. We pushed the limits of each twelve-hour day.
FAMILY AFFAIR was a truly collaborative effort - and I believe all the stronger for it.
PRODUCTION PARTNERS
The following brands supported our production through product placement: